How Do I Impress My Employees? 10 Leadership Behaviors People Admire

In leadership, every word you say, the action you take, and the decision you make has the potential to impress your employees. Granted, there are specific leadership behaviors that you can adopt into your day-to-day leadership practice that is considered highly admirable among employees.

So, whether you are a first-time supervisor or a people manager who has recently taken on a new team, consider the following list of leadership behaviors that will not only impress your employees but will, more importantly, help you gain their trust and earn their respect.

How Do I Impress My Employees? 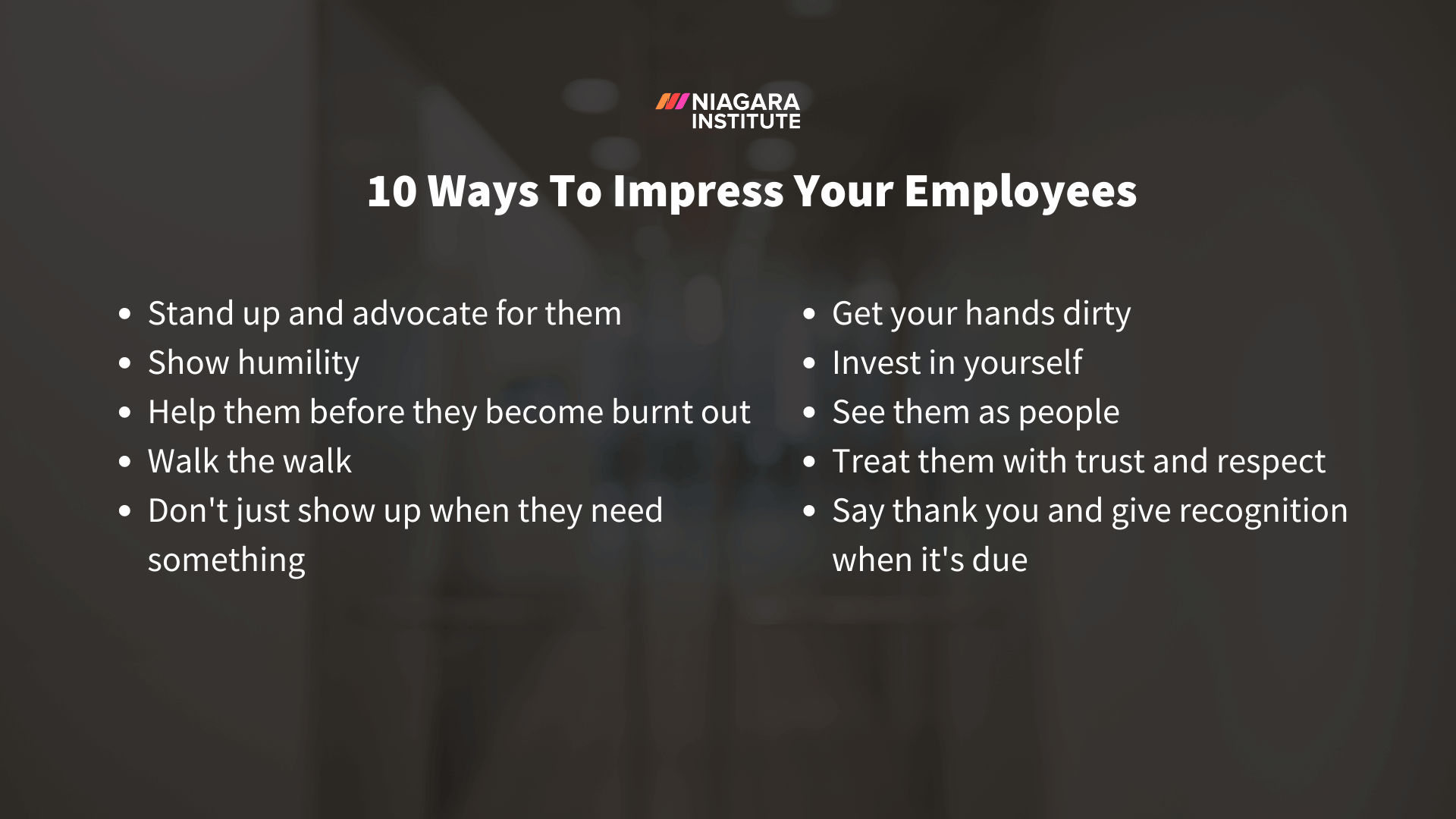 Stand Up and Advocate for Your Employees

When an employee gets mistreated by or misspoken to by a colleague, company leader, or even an external entity such as a client, it can shake their confidence, morale, and productivity. While leaders often want their employees to “fight their own battles,” so to speak, there is nothing more impressive or admirable than a leader who steps in at the right moment and stands up for an employee. That’s because this behavior shows employees that you have their back and their best interests at heart, which is not something they will be quick to forget.

It is a common misconception that admitting you were wrong, that you made a mistake, or that you changed your mind, makes you look weak or is an undesirable leadership behavior. As the best-selling author, Sylvester McNutt III, wrote, “I can respect any person who can put their ego aside and say, ‘I made a mistake. I apologize and am correcting this behavior.’” Your employees will, more often than not, feel the same way. By showing humility in a position of formal authority, you show your employees your character and humanize yourself, which is impressive, especially in workplaces where it is not the norm.


Help Employees Before They Burn Out

American businessperson Arnold Glasow once said, “One of the tests of leadership is the ability to recognize a problem before it becomes an emergency.” In the case of employee anxiety, stress, burnout, you want to be able to spot your employee’s unique verbal and nonverbal signs as early as possible, so you can then mitigate the potential fallout that negatively impacts not only your employee’s ability to succeed but your own and your team’s. In addition, this will make individuals feel seen and heard, which is a memorable and highly admirable leadership behavior.

If you have a double standard for yourself and your employees, then let it be known that you are playing a dangerous game. It is less than admirable among employees to have a leader who says one thing and then does another. So, if you want to impress your employees, you need to pay special attention to not just talk the talk, but walk the walk in every possible way.


Don’t Just Show Up When They Need Something

As a leader, you shouldn’t only interact with your team when you need something from them. Rather, you should be working and meeting with them consistently, thus creating and establishing a working relationship based on trust and mutual respect.


Get Your Hands Dirty

When times are busy or stressful, an admirable behavior is to quickly offer your help and take on a fair share of the work. In doing so, you are sending the message to your employees that you don’t think you’re above them just because you’re in a leadership position.

An underrated way to impress your employees is to invest in bettering yourself as a leader. For example, if you attend a leadership training program or meet with a professional coach one-on-one, your employees will see it as an indication that you want to be a better leader for them, which they will find admirable.

So the next time you do so, share where you’re going, and what you’re working on, and admit when you come back that you’re going to be practicing applying what you learned. Not only is this impressive, but it also shows that you see value in your own ongoing development and sets the tone for them to do the same.


See Your Employees as People

When you have an off day at work, you hope that your employees will show you grace. You hope they do not let it define you, your capability, or your commitment. You may even hope someone genuinely asks you how you’re doing. The thing is, employees, want the very same. They want to be seen as whole people with lives outside of work. While it might seem obvious, taking a genuine interest in your employees as people and seeing their off days for what they are, is an admirable leadership behavior that is too often overlooked.


Treat People With Trust and Respect

Many people go into leadership with the mindset of “I’m not going to trust anyone until they’ve proven themselves to me.” But what if you treated people with trust and respect from the get-go until proven otherwise? This creates an incentive among employees to do their best work, so they don’t fall out of their good graces or lose the privileges that come with the trust and respect of a leader. Not to mention, it’s an impressive leadership practice because it is not all that common.


Say Thank You and Give Recognition Where It’s Due

Last but certainly not least is a leadership behavior that might seem obvious but may not be. According to one study, 65% of employees have not received any form of recognition for good work in the last year. Therefore, if you want to impress employees, you may be surprised just how far a simple “thank you,” or pat on the back for a job well done can go. Your employees will admire the recognition and be reassured that their hard work is not going unnoticed and encouraged to keep it up.

One-on-one meetings, face to face meetings, or check-in meetings, whatever you may call them,...

Very few leaders set out to be intimidating. In fact, most have a genuine desire to get along with...