Do You Have a Toxic Boss Working For You? 6 Signs to Look Out For 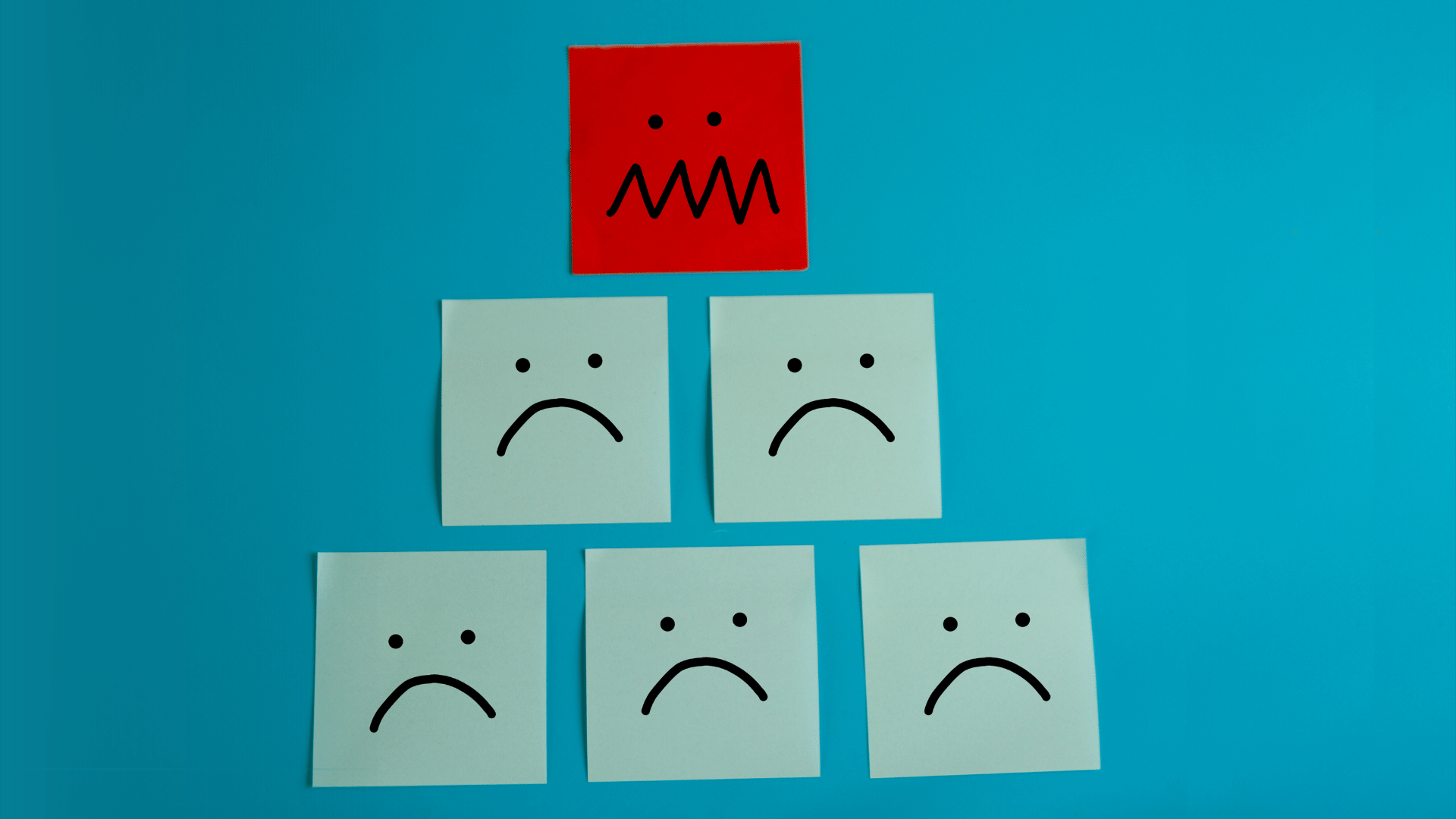 No one in leadership is perfect. Leaders are flawed and as prone to mistakes as anyone else in the workplace.

However, sometimes it's bigger than that. Rather than making an occasional mistake or bad judgment call, some bosses display a pattern of bad behavior that causes widespread repercussions for employees, fellow leaders, and even customers. This is the difference between a typical boss and a toxic boss.

If you’re here reading this article, you likely suspect that one of the leaders you oversee is exhibiting the signs of a toxic boss and want to determine if you do in fact, have justified reason to be concerned or to take corrective action.

To help you get there, read through the following list of 6 signs that are commonly indicative of a toxic boss and as you do, contemplate if the leader in question is displaying more than one of those signs and what you can do to address the problem if one does exist.

6 Signs of a Toxic Boss 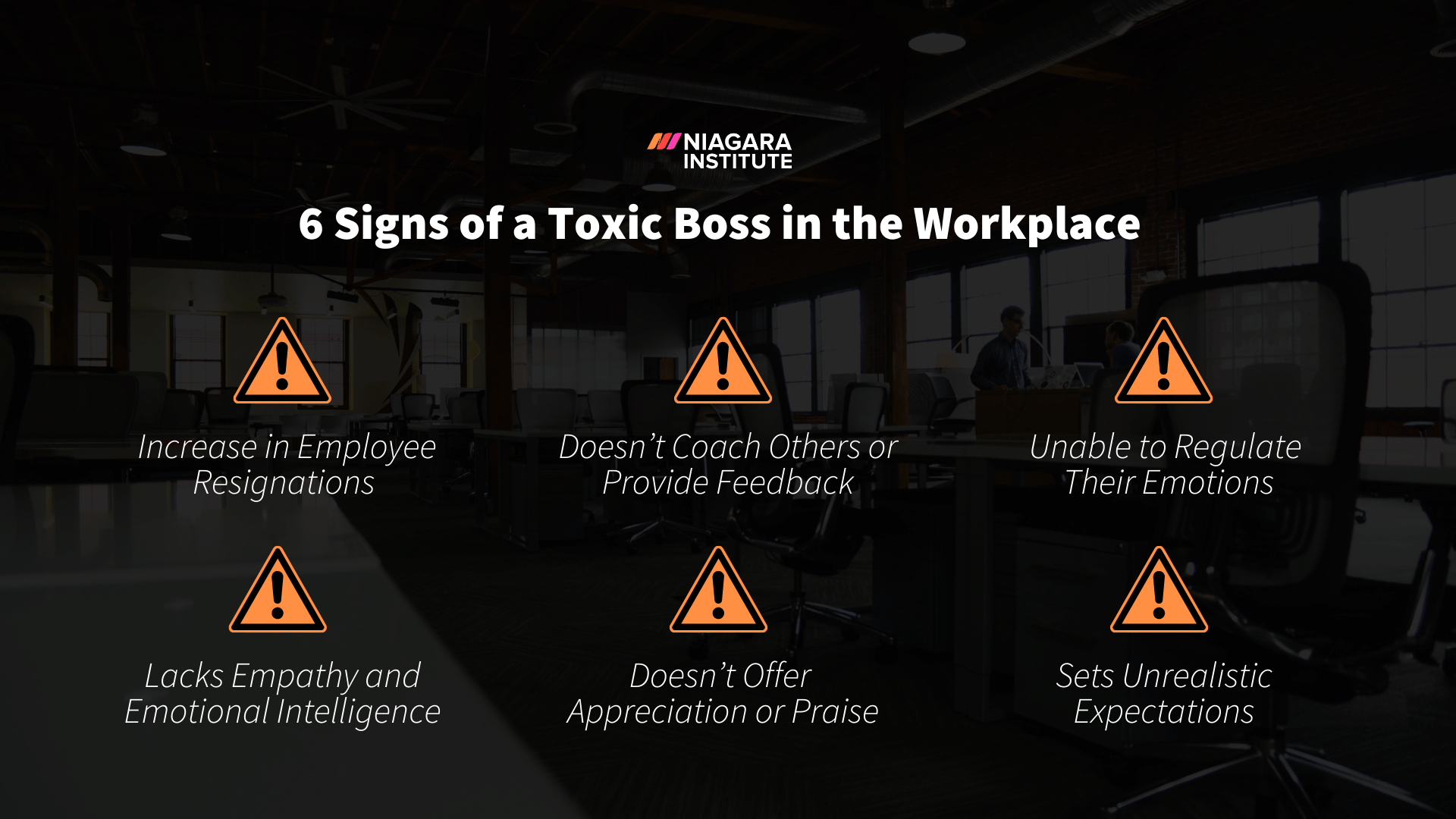 One cause to suspect a toxic boss is when the people working for them begin to quit unexpectedly or en-mass. For example, a recent study of over 2,0000 employees in the UK found that more than 2 in 5 employees have left a job because of a bad or toxic boss who failed to listen, was seen as ‘unapproachable,’ treated members of the team differently, or yelled at the team. This is to say that if you have seen a recent uptick in questionable resignations, it’s important to dive deeper into the potential reasons why, such as leadership.

Despite the fact that today’s workforce craves in-the-moment coaching and constructive feedback, some toxic bosses will neglect or refuse this crucial part of the leadership role. Not only does this create a culture of fear and anxiety regarding one’s performance, but it can also crush an employee’s empowerment and motivation, as well as stagnate their learning and growth.

⚠️ Unable to Regulate Their Emotions

Employees shouldn’t feel as though they are walking on eggshells around their boss, worried about whether they will be warm one day and then spiteful or angry the next. But, unfortunately, if a leader cannot regulate their emotions, this is the experience that employees of that person will have to endure day-in and day-out.

According to research conducted by psychologists, “high-power individuals (ex. leaders) tend to be less sensitive to the emotions of others, less willing to consider others’ perspectives, and less able to accurately infer others’ emotions.” This is concerning, given that emotional intelligence and empathy in leadership are linked to increased innovation, retention, inclusion, and engagement.

When an employee works overtime, does their boss express their appreciation? When the team achieves a significant milestone, is that success celebrated by their boss? Does the leader say, “Good job, team?” You might be dealing with a toxic boss if the answer is no.

At this point, ask yourself whether or not that leader withholds praise and appreciation intentionally. In this case, that is a far more nefarious and concerning situation than a leader who is unintentionally doing so because they aren’t comfortable expressing gratitude in the workplace but could learn to do so.

A tell-tale sign of a toxic boss is someone who sets unrealistic expectations for their employees. Whether they expect their employee to meet an impossibly high standard or unreasonable deadline, you’ll notice something is amiss when employees begin to burn out, disengage, and even leave the company.

Unfortunately, toxic bosses are far more common than we might believe. According to McKinsey, 56% of workers in the United States claim that their boss is mildly or highly toxic, while 75% say that their boss is the most stressful part of their workday. If this doesn’t concern you, then it should.

Fortunately, if you oversee a team of managers, supervisors, and leaders, you can do something about it.

For example, many in leadership do not receive the proper training and coaching needed to be healthy and effective leaders. In place of that formal leadership training, they may take cues from and mimic their past leaders, even if those leaders weren’t positive role models. Therefore, one way to prevent leaders, especially up-and-coming first-time leaders, from turning into toxic bosses is to provide them with training and coaching that sets a strong example of effective leadership and equips them with practical tools they can use in their day-to-day life.

Why Do Managers Need Coaching Skills? What the Research Says

Imagine you walk into your annual performance review. You aren’t completely sure of what to expect,...

The 4 Types of Work Culture (+Quiz)

What type of work culture do you have? Whether this is a question you’ve been asking yourself or...

How To Create a Culture Survey For Free (+ Questions to Ask)

Are you wearing rose-colored glasses when it comes to your workplace culture? If you’re in a...